There are numerous ways to serve nation and its people. Popularizing and promoting science through vernacular is one of them. As the nation celebrates the Azadi Ka Amrit Mahotsav, marking the 75 glorious years of its Independence, it’s time to remember one of the greatest physicists and mathematician Satyendranath Bose who not only laid the foundation over which the big scientific experiments unraveling the mysteries of Universe are being carried out today but also laid the bedrock of teaching science to the students in mother tongue. Born on January 1, 1894 in Kolkata, his father Surendranath Bose was employed in engineering department of East India Railway. The eldest and only male in the family with seven children, Bose was a multifaceted genius who worked in diverse fields such as chemistry, biology, soil science, mineralogy, philosophy, fine arts, archaeology, literature, and languages.

He was a born genius and his life stands as testimony to this. One incident that speaks of his outstanding capability is that he was awarded 110 marks out of 100 in mathematics test by his school teacher. When asked for an explanation by the headmaster for his unconventional or ‘erroneous’ marking, what one might call it, Bose’s teacher Upendra Bakshi replied, “Satyen had succeeded in the allotted time, in solving all the questions without excluding any of the alternatives.” It simply means Bose had successfully solved all the questions by all the possible methods, that too within the allocated time. This speaks volume about his genius. Bose made a name for himself in school due to his love for science. His mathematical prowess made Bose an outstanding pupil.

Satyendranath began his education at an elementary school in Calcutta before entering the Hindu School in 1907. Later he attended the Presidency College, where another noted scientist Meghnad Saha was his fellow student. Bose came in contact with teachers like Jagdish Chandra Bose and Prafulla Chandra Ray, who inspired him to aim high in life. 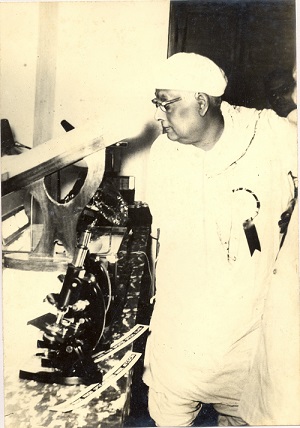 As science unfolds the mysteries of the Universe, the accepted view today is that the Universe started with a gigantic explosion called the ‘Big Bang’. For fractions of a second after the Big Bang, the Universe consisted of the most elementary constituents of matter interacting with each other through other particles which are carriers of different kinds of forces existing in nature. And, the carriers of all forces in Nature are ‘bosons’ or the God Particle ‘Higgs-Boson’. British Physicist Peter Higgs of the ‘Higgs-Boson’ is a familiar name in the world of science. However, it is not well known that the term Boson, owes its name to the pioneering work of the late Indian physicist SN Bose. His work on the quantum theory of light provided the foundation for Bose-Einstein Condensates, a new state of matter in which thousands of atoms condense into a single giant atom that behaves like a wave. Particles that follow Bose’s statistics have been named bosons in his honor. Bose is called the ‘Father of the God Particle’. There is no other scientist whose name is linked with Einstein as Bose’s name is in all the textbooks of physics. Albert Einstein’s generalization of Bose’s work led to the system of statistical quantum mechanics, now known as Bose-Einstein statistics.

It would not be wrong if we say that the Bose laid the foundation over which these path-breaking experiments are being carried out today. The Large Hadron Collider (LHC) at the European Organization for Nuclear Research (CERN) was planned with the special aim of detecting the Higgs particle if its mass was below 1000 GeV. CERN, as a result of two experiments, has reported the discovery of a new particle, expected to be the long sought-after Higgs particle.

[LHC at CERN: The LHC at CERN in Switzerland is the highest-energy particle collider in the world. It is currently the only place scientists can create and study Higgs bosons. ]

While working as a Reader in the Physics Department of the University of Dacca, Bose wrote a paper on a novel way of counting states with identical particles. However, his paper on Planck’s law was not accepted for publication. Not bogged by this and not losing heart, he sent the article directly to Einstein in Germany with a request to help it get published in the leading German-language science journal Zeitschrift fur Physik. In his covering letter to Einstein, Bose wrote “…though a complete stranger to you, I do not feel any hesitation in making such a request. Because we are all your pupils though profiting only by your teachings through your writings…..”

Einstein not only acknowledged the receipt of Bose’s letter but also assured Bose that he would have it published as he regarded it as an important contribution. Einstein himself translated Bose’s paper into German and it was published in August 1924. Einstein applied Bose’s method to give the theory of the ideal quantum gas and predicted the phenomenon of Bose-Einstein condensation.

One of the aspects of Bose’s life was that he was very unconventional. In meetings, conferences, or in any public forums Bose would often close his eyes and people would think that he had fallen asleep. But he used to be alert all the time. To quote S. D. Chatterjee, one of his contemporaries: “The conscious and the unconscious appeared to have a strange deep unity in his restless brain. At a different level of perception, the legend carved out a superb figure of a giant who was engagingly childlike and a man of supreme genius who was entirely human. Often he appeared to be immersed in laziness, but the somnolescence was full of alertness. Once presiding over a lecture of Professor Niels Bohr at the Saha Institute of Nuclear Physics, he had closed his eyes and it seemed that he was asleep. But when Professor Bohr hesitated before the blackboard and said ‘Perhaps professor Bose can help me here, he at once opened his eyes, explained the mathematical point, and seemed to revert to his unseeing meditation. On another occasion, at the same venue, he was presiding over a lecture by Professor Frederic Joliot Curie. After introducing the speaker in English, he closed his eyes as usual. But when Professor Joliot asked for an interpreter to render his speech in French into English and none came forward, Professor Bose opened his eyes, stood up and translated Professor Joliot’s speech into chaste English sentence by sentence.”

Bose loved music and fine arts. Commenting on Bose’s love for fine arts and music, S. D. Chatterjee wrote: “His (Bose’s) personality casts its spell of genius on the common people. They regarded him as a living myth or legend. Often in informal musical concerts, Bose, the connoisseur of classical music, would close his eyes and seem to fall asleep, to everybody’s dismay. But at the end, he would open his eyes and put extremely pertinent questions to the performer. He was extremely fond of instrumental music and played on the Esraj like a master. People have seen him playing on his Esraj in a lonely corner of his home, with tears rolling down his eyes. He also had an absorbing interest in fine arts, and often discuss the elegance of mural paintings with maestros like Jamini Roy. Seldom did he decline to attend any musical soitree, cultural function or art exhibition, when invited.”

Further Shantimay and Enakshi Chatterjee have written that Bose played the flute too. They wrote: “The fact that he played the Esraj himself is well known. What is not so well known is that he played the flute too. Music was one of his early loves and his interests ranged from folk music to classical as well from Indian to Western. When Professor Dhurjati Prasad Mukherjee was writing his book on Indian music he received a number of helpful suggestions from his friend Bose. Dhurjati Prasad used to say that if Bose had not been a scientist he might have become a master musicologist.”

Bose strongly felt that it was duty to present science to the common man in his own language. For popularizing science, Bose wrote in Bengali. This is the reason why his contribution in popularizing science is not known outside Bengal. It was largely Bose’s efforts that led to the establishment of the Bangiya Bijnan Parishad (Science Association of Bengal), a registered society with the sole objective of promoting and popularizing science through the vernacular. The Parishad was formally inaugurated on January 25, 1948. As part of his attempt in popularizing science through the vernacular, Bose even started teaching Relativity to post-graduate students in colloquial Bengali. He also started the Bengali science magazine ‘Gyan O Bigyan’ to promote understanding and love for science among youth.

Rabindranath Tagore dedicated his only book on science – Vishwa Parichay to SN Bose. He was conferred with the Padma Vibhushan award in 1954.  Bose was the Vice-Chancellor of the Visva-Bharati during the years 1956-58.

At the age of 80, Bose suffered an unexpected and severe heart attack and breathed his last on the 4th of February 1974. As S. D. Chatterjee has written, “With Professor Satyen Bose’s death an era ended—an era of great men who created science in India.” It’s the duty of all, especially the young generation of scientists and students to carry forward his legacy — the legacy of the love for science, the legacy of popularizing science in the mother tongue, and a lot more. Our younger generation has a lot to learn from the lives of our great scientists like S. N. Bose who had rendered yeoman service in the field of science.

Established in 1986 to honour life and work of Prof SN Bose. Offers

To nurture future innovators and thought leaders, the Science & Engineering Board (SERB), Department of Science and Technology (DST), Govt. of India, the Indo-U.S. Science and Technology Forum (IUSSTF) and WINStep Forward have partnered to develop a dynamic and transformative student exchange program between premier institutions in India and the United States.

Indian citizens currently pursuing a Bachelors or Masters' degree at a recognized institution of higher education and learning in India.

TWAS and the S.N. Bose National Centre for Basic Sciences in Kolkata, India have agreed to offer fellowships to young foreign scientists from developing countries who wish to pursue research towards a PhD in physical sciences.

TWAS-SN Bose Postgraduate Fellowships are tenable at the S.N. Bose National Centre for Basic Sciences in Kolkata, India for studies leading towards a PhD degree in the physical sciences for four years with the possibility of a one-year extension.

The S.N. Bose National Centre for Basic Sciences, Kolkata has maintained an archive of Prof. SN Bose, that includes letters that Bose has written to others on several occasions, photographs, items of his personal use, Bose centenary publications, major research among other things.