Home / Featured Articles / A sea of change along the seashore

A sea of change along the seashore

In 1930, Mahatma Gandhi took a march to Dandi on the Gujarat coast and broke the draconian salt law. He was joined by swathes of people on his way to Dandi and as he proceeded along the coast. The massive public participation spoke of support that Gandhiji had for the cause. Again, in 2022, people cutting across age and profession are making their way to the beaches and coasts across the nation in large numbers. But this time around the cause is coastal cleanlinessand is no mean task as the campaign “SwachhSagarSurakshitSagar”spans through 75-days, 75 beaches along the India’s 7,500 km coastline. What draws parallel between two events separated by almost a century apart is people’s enthusiasm, their zeal and their coming together for a cause.

The cause that the pollution, particularly by plastic, should no more be allowed to take a toll on beauty and biodiversity of our oceanic ecosystem. Surrounded on three sides by sea— the Indian peninsula has vast and varied coastline which is home to many exotic marine and littoral species and is a treasure trove of biodiversity. Life abounds in plenty and in variety along the coasts— in the estuaries, in mangroves, in backwaters, in littoral zones and on the beaches and coasts. India has 7,500 Km coastline that run across nine States and four UTs.

Sea and its coasts have been the source of livelihood and sustenance for a vast majority of people including the tribaland aboriginals living along the coasts and who depend upon the natural resources available in plenty. However, fisherman community and the likes are the first who bear the brunt of climate change induced catastrophic phenomenon triggered in Oceans and Seas. Chronic inundations and flooding, extreme weather events like storms, tsunami etc. are to name a few. Tackling the climate change is the collective responsibility of the nations across the world and the onus should not be a burden on the developing nations alone. Scientists and nations across the world are making serious efforts to mitigate the climate change crisis. But we cannot and should not expect overnight change in the scenario. It’s a long-drawn process and there are no readymade solutions. However, what bestows on each of us is to keep our coasts clean and we all must volunteer and step-in for the ‘Shram-Dan’. It doesn’t take much to roll up your sleeves, wear a pair of gloves, a mask, and walk your way or reach nearest beach to pick the trash – plastic wrappers, cold drink cans, chips packets, water bottles, unused plastic cutlery, plastic nets etc.— and throw it in bin.

Every nation that has a shoreline must make a bid to ensure that the coasts remain clean of pollutants that are a threat to the marine life and thus jeopardizes the biodiversity besides ruining the aesthetic values of the coastline and beaches. We have seen horrific images and videos of turtles suffocating to death entangled in discarded fishing nets, premature deaths of several littoral and other marine species, unhatched eggs of Olive Ridley Turtles, head and toes of turtles, reptilesand other species severed off by the beer and cold-drink cans left on the beach, plastic litter that chokes the throat of migratory sea birds and other marine animals, threat that coral reefs and planktons are facing from pollutants and from the discarded fishing trawlers and other under water activities etc. Accidental oil spills and direct discharge of pollutants into sea adds to the severity.

Against this backdrop, the effort to clean our 7,500 km coastline, 75 beaches in 75 days is indeed a noble one. The coastal cleanliness campaign is a step-in right direction and the high footfall for the campaign is reflective of the enthusiasm that the people are showingin cleaningthe beaches. The 75-day long campaign launched from 5th July by Ministry of Earth Sciences will culminate on “International Coastal Clean-up Day” on 17th September 2022.The campaign targets transformation and environmental conservation through behaviour change. The three underlying goals of the campaign are – consume responsibly, segregate waste at home and dispose responsibly. Also, a mobile application 'Eco Mitram' has been launched to spread awareness about the campaign and voluntary registration of citizens for the beach cleaning activity.

Within the few days of the start of the campaign, more than 200 ton of garbage, mainly the single use plastic has been removed through the public participation. This speaks volumes about the awareness that the coastal cleanliness campaign was able to create among the masses. People of all age groups and professions volunteered to clean the beaches— wearing gloves and masks, equipped with broom in their hands, people were seen picking the litter and putting it in bin. 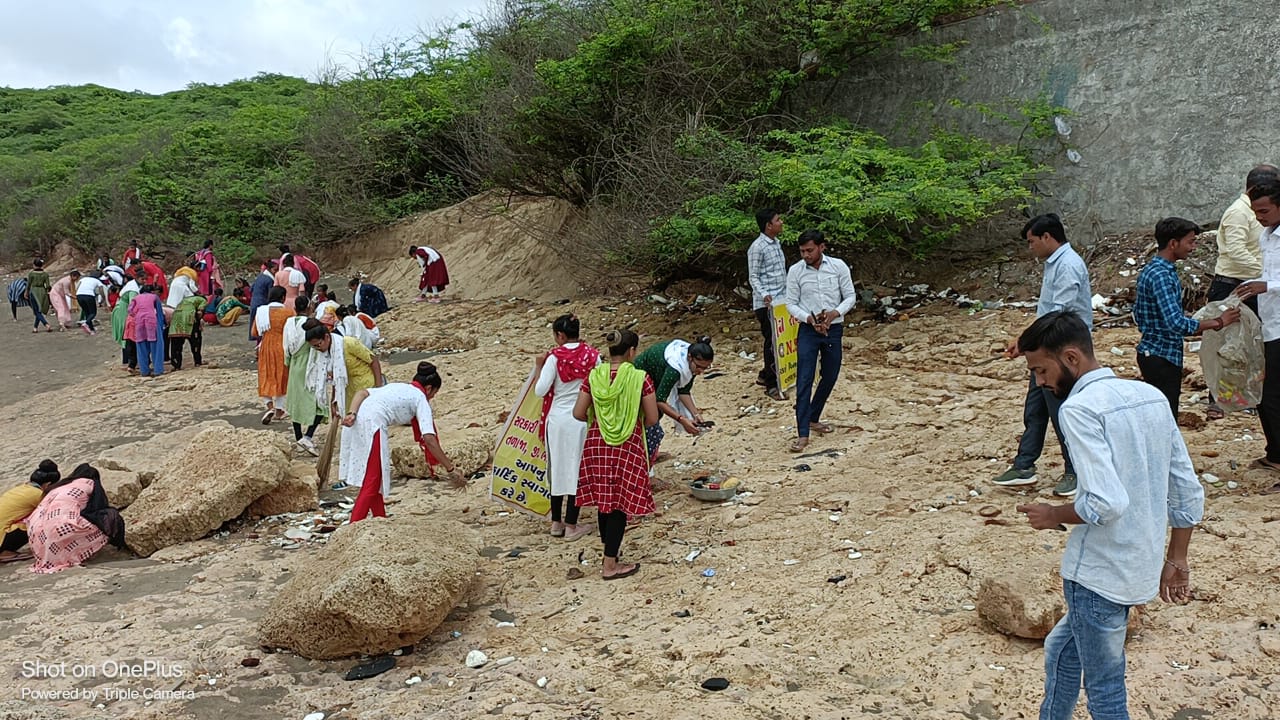 Beach cleaning by NSS students and others at Zanzmer beach, Bhavnagar, Gujarat

History stands as a testimony, none of the movements or campaigns are successful without public participation. With the coastal cleanliness campaign reaching its last leg, it’s time to not just be a fence-sitter but rather be part of the history in making.

To know about programmes and departments visit: https://www.indiascienceandtechnology.gov.in/organisations/ministry-and-departments/ministry-earth-sciences-moes