Did you know? On Earth, twice each year (in March and September), daytime and nighttime are of approximately equal duration all over the planet.

Equinox is a unique phenomenon during which a planet’s subsolar point passes through its equator. On equinox days, the Earth's axis is perpendicular to the Sun's rays, implying that all regions of the planet receive approximately the same number of hours of sunlight. In other words, only during equinox is the Earth's 23.5° axis not tilting toward or away from the Sun. This is why it is called an “equinox”, derived from Latin words aequus, meaning equal or even, and nox, meaning night. However, this literal translation is not entirely accurate. In reality, equinox days do not have exactly 12 hours of daylight and 12 hours of darkness. Earth receives a few more minutes of light than darkness during an equinox. This is because sunrise is defined as the moment when the sun's tip crosses the horizon, and sunset is defined as the moment when the sun's other edge vanishes behind the skyline. Because the sun is a disc rather than a point source of light, at an equinox, Earth gets a few minutes of extra light (rather than darkness). Furthermore, the sun's light is refracted by the atmosphere and continues to travel to "nighttime" Earth for a short time after the sun has dipped below the horizon. 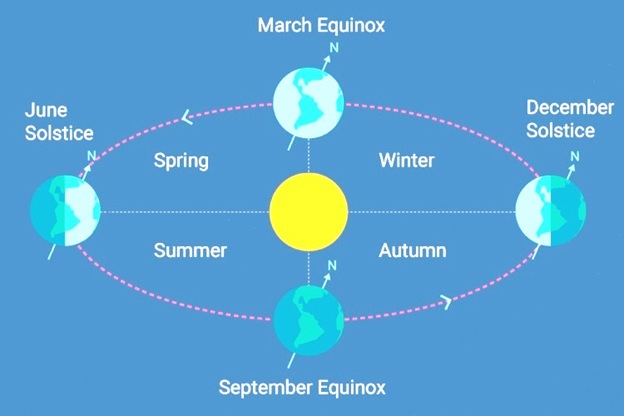 The March equinox is when the Sun crosses the celestial equator—an imaginary line in the sky above Earth’s equator—from south to north which happens on March 19, 20, or 21 every year. The date of the equinoxes varies because a year in our calendar does not exactly match the length of the tropical year—the time it takes the Earth to complete an orbit around the Sun.

Therefore, an equinox happens twice a year (at the start of the spring and fall) when the sun is nearest to the equatorial plane resulting in equal lengths of day and night, and solstice is the time of the year (during the summer and the winter) when the sun is farthest from the equatorial plane resulting in long nights and days.